Federal Statute of 1872:
“No article, or thing, designed or intended, for the prevention of conception [italics mine], or notice of any kind in writing or print, giving information directly or indirectly, where or how, or of whom, or by what means either of the things before mentioned may be obtained or made, shall be carried in the mail (15)” (Cirillo 263). (Lawless)

Download File
﻿In her essay entitled "Voluntary Motherhood; The Beginnings of Feminist Birth Control Ideas in the United States", Linda Gordon attempts “[ . . . ] to trace the content and general development of "voluntary motherhood" ideas and to situate them in the development of the American birth-control movement”(5). Gordon claims that there were three types of groups that believed in voluntary motherhood “[. . .] suffragists; people active in such moral reform movements as temperance and social purity, in church auxiliaries, and in women's professional and service organizations (such as Sorosis); and members of small, usually anarchist, Free Love groups” (5). While Gordon’s article is informative, she does not define what voluntary motherhood is until halfway through the article. Gordon described voluntary motherhood as movement for women to have power over their own bodies and to have the right to refuse their husbands’ sexual advances. Gordon states “A woman's right to refuse is clearly the fundamental condition of birth control—and of her independence and personal integrity” (11). She discusses the various forms of birth control that married couples of this era used, such as abstinence, celibacy, and men and women avoiding organisms (they did not believe in “unnatural” forms of birth control) (9). Overall Gordon’s essay is informative with quotes from many free love and suffragist movement advocates. (Lawless).     ﻿ 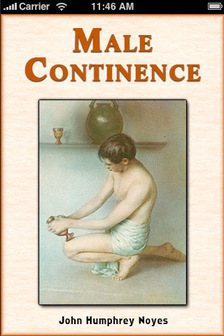 "Under "male continence," a practice technically known as coitus reservatus, a couple would join together in sexual intercourse but the man was not supposed to ejaculate, either during or after that intercourse. Noyes initially developed this extraordinary technique in response to the fears that his wife Harriet had of becoming pregnant and having additional painful miscarriages. The technique was apparently practiced as the sole sanctioned method of birth control at Oneida for twenty-one years between 1848 and 1869, during which time, according to Maren Lockwood Carden's figures, at most thirty-one accidental births took place in a community of some two hundred adults frequently exchanging sexual partners. Carden, Oneida, 51, based on Hilda Herrick Noyes and George Wallingford Noyes, 'The Oneida Community Experiment in Stirpiculture," Scientific Papers of the Second International Congress of Eugenics, 1921, in Eugenics, Genetics and the Family (Baltimore 1923), 386. As gradually introduced at Putney and Oneida, male continence served not only as an effective method of birth control but also as a means of discouraging exclusive psychological attachments between members of the community which might interfere with their loyalty to the group" (Foster 173-74). Full cited article can be found under Free Love tab (Lawless).
Cirillo, V J. "Birth Control In Nineteenth-Century America: A View From Three Contemporaries." The Yale Journal Of Biology And Medicine 47.4 (1974): 260-267. MEDLINE with Full Text. Web. 20 Feb. 2014. (Lawless)

Download File
In his work, "Birth Control In Nineteenth-Century America: A View From Three Contemporaries.", Vincent J. Cirillo explores the evolution of birth control in the United States. He analyzes the works of John Humphrey Noyes, Anthony Comstock, and Edward Bliss Foote. Cirillo discusses John Humphreys theories on Male Continence, and the community he built. He goes on to analyzing Anthony Comstock's story and his triumph in getting a bill passed which outlawed the right to distribute information about contraception. The final radical that Cirillo chooses to examine is Edward Bliss Foote.  According to Cirillo, Foote attempted to educate the public about effective contraceptives such as “—condom, glans condom and cervical diaphragm—which he recommended” (266) however “In June 1876 Foote was indicted under the Comstock law for distributing contraceptive information through the mails in his pamphlet "Words in Pearl" (266). Although Foote was trying to do the right thing for families of all classes, public sexual education was illegal during this era because of Federal Statute of 1872. (Lawless)
Tone, Andrea. “Black Market Birth Control: Contraceptive Entrepreneurship and Criminality in the Gilded Age.” Journal of American History. 87.2 (2000): 435-459. America: History & Life (EBSCO). Web. March 2014.
In this article, Andrea Tone, an associate professor of history at the Georgia Institute of Technology, examines the effect—or rather, lack thereof—that the 1873 Comstock Law had on the advertisement, sale and distribution of the contraceptive devices it endeavored to prohibit. The law was unsuccessful, Tone argues, because the public—from the judges, prosecutors and jurors charged with upholding the law, to individual consumers—had little interest in giving up these devices. The result, according to Tone, was a black market in birth control that thrived in an atmosphere of “legal leniency, entrepreneurial savvy, and cross-class consumer support.” Further, Tone suggests that Anthony Comstock’s war on contraception was fundamentally at odds with American views on entrepreneurship and personal privacy. Selective enforcement, overburdened investigators, interpretations of medical uses for contraceptive products as well as acceptance of birth control methods by most couples guaranteed their sale and distribution despite the law. [DS]

Gordon, Linda. “Voluntary Motherhood; The Beginnings of Feminist Birth Control Ideas in the United States.” Feminist Studies. 1:3/4 (1973). 5-22. JSTOR. Web. March 2014.
Linda Gordon examines the “voluntary motherhood” movement of the 1870s as something more unique than a fledgling call for birth control involving artificial barriers to pregnancy (contraceptives) or abortion. Rather, Gordon argues that the feminists, free-lovers and moral reformers behind the movement saw their cause as a way for women to assert control over their sexual lives. In an odd twist, she reasons that it was by making sex more restrictive, not less, that women would be able to celebrate their sexuality. This would be attained by self-regulation; an understanding between partners to abstain from sex periodically or, even more radically, to allow married women to refuse sex. This notion of “voluntary motherhood,” then, addressed sexual practices but went further, to the heart of equality (or inequality) in the marriage relationship and the world at large. In so doing it did not deride maternity; rather, it elevated the woman who chose motherhood as a conscious pursuit. If this seems contradictory, perhaps it is; the strength of Gordon’s essay cracks the advocacy for voluntary motherhood wide open, and the pieces don’t always fit. That is to Gordon’s credit: she is piecing together a nascent movement where the means—if not the ends—were still being worked out. [DS]