Reprinted from the New York Herald, this anonymous article uses the introduction of legislation by New York Assemblyman Austin (no first name given) to reform New York’s marriage laws as a jumping-off point to criticize the multiplicity of marriage laws then at work in the nation’s states and territories. Specifically, Austin’s measure would require a license be obtained before a marriage ceremony, and that the marriage be reported to the state board of health. Against this context, the writer outlines the great discrepancies among state laws governing marriage with regard to the minimum age to marry, marriage between races, and requirements for ceremonies, officiants, and witnesses. [DS] 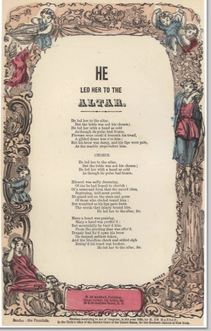 Cook, Eliza. He Led Her to the Altar. New York: H. DeMarsan, publisher, 1860. American Broadsides and Ephemera, Series 1. Web. March 2014.
In three verses, this ballad laments the predicament of a groom as he exchanges vows with a woman who is “not his chosen.” With references to flowers, a “golden dome,” and “marble steps” it may be assumed the ceremony is taking place at an opulent church. Still, the focus is entirely on the groom’s despair, with little description of the bride. With “his soul…sadly dreaming of one he had hoped to cherish” it is strongly hinted that he had affections for another. The lyrics are presented on a decorative sheet with a three-color border. [DS]

Bak’s essay examines the figure of the bride and its development over the past 150 years through a feminist media studies lens. Bak begins by focusing on the figure of the bride, presented in Godey’s Lady’s Book first published in 1857, which emulates the demure, virginal figure. The essay looks at wedding traditions throughout the United States in the 1800s, and emphasizes that women generally did not have any rights or any say in the wedding or the marriage itself. Indeed, women were defined by their marital status, as it effected their social and legal standing in the world. Godey’s Lady’s Book was a magazine intended for women readers, which always casts the brides within the magazine stories as shrinking violet-types, victims of patriarchal archetypes. The image of the bride in the magazine is vastly different from the current manifestation of the modern bride, as the earlier weddings were much less ostentatious than modern weddings, with the bride as much less of a focal point and almost more of a peripheral aspect of the wedding itself. While modern weddings focus on the bride as well, the weddings of the 1800s did not set focus on being the “bride’s big day” and more about the transfer of property and adjusted social status.[Lovell]

Simon Charsley’s essay details the origins and developments of the traditional wedding cake. The idea of a culinary centerpiece for the wedding celebration dates back to medieval times, during celebration feasts. Charsley’s essay details how cakes developed, as sugar became more readily available and sweet confections became popular centerpieces for celebrations. As sugar became more available, the use of sugar to create spectacular confections became a popular custom for celebrations of wealthy individuals. The earliest wedding cake recipe is dated for the late 1600s, although it was a simple “spicecake” and not yet the manifestation of the wedding cake that would become a staple of modern wedding celebrations. In the late 1700s, the “bride cake” was coined in a cookbook, in which Mrs. Raffald provided a recipe for cake which included the addition of icing. The bride cake did not gain popularity until 1858, when cake became a focal point at the weddings of Queen Victoria’s children. From then on, the grand spectacular of the wedding cake became a popular tradition at weddings. The grandeur and style of the elaborate wedding cakes became the common custom for weddings, which has endured to present day. [Lovell]

This essay focuses on the commercialization of weddings in the second half of the nineteenth century. Looking at modern weddings and their excessive opulence begs the question of how weddings became to be so. Penner looks back at how weddings began to evolve from simple ceremonies into costly affairs. The wedding of Queen Victoria in 1840 sparked a popular trend of the “white wedding” which eventually gave way to trends such as the white wedding dress and the bride cake. The commercialization of weddings began to take place, as these and other wedding traditions were put into place. The celebration of nuptials became increasingly more grand and with more traditions, coming closer to modern weddings. Wedding presents began to become popular, as companies vied to make money off of weddings, advertising their wares in print. Gift giving, particularly bridal gifts such as jewelry, silverware, and other items considered essential for creating the home of the new couple, became a huge part of weddings, and thus became a part of social etiquette in the Victorian Era. Luxurious weddings not only became de rigor at the time, but also set the foundation for modern wedding traditions. [Lovell]

The newspaper article, published in Public Ledger, details a variety of wedding customs. The customs are ones that are not widely practiced, but that are based more locally. They include customs followed by the bridal party as well as the bride and groom for pre-wedding celebrations. In addition, the short newspaper article discusses local custom for the bride’s first wedded kiss, which often was not claimed by her husband, but by the clergyman responsible for marrying the couple (although it is noted that most clergymen declined to take advantage of this custom). It also details the customs of “hot pots,” or small cups of congratulatory drinks, which were sent around for the members of the wedding party to sip. Other customs include pouring boiling water over the front step of the newlywed’s home and of a race from the religious service to the nuptial celebrations. The wedding celebrations were varied and fairly localized, and so did not seem as if they were widely practiced customs. [Lovell]