This article recounts a meeting held in Chicago for parents, as part of a continuing effort to discuss what was referred to as the “sex hygiene problem”. Dr. Caroline Hedger, a women’s work physician, spoke about the working conditions of Chicago women and the effects of labor on women’s ability to conceive and birth healthy children. The low infant mortality rate, according to Dr. Hedger, was completely due to the inability of young American women to nurse their children for a full nine months, citing physical weakness as an effect of their social class (which necessitates, then, that women join the workforce). Dr. Hedger indicated that hysteria from nerve strain, headaches caused by eye strain, and back pain resulting from “’too much stress in Chicago life’” (Cochran 1) were among the main physical ailments caused by the working conditions of sweatshops, and the “’hurry-up…slave-driver’” (3) mentality. Interestingly, Dr. Hedger categorized women into “classes for future motherhood” (2) (young girls of higher economic standing that don’t need to work, and who are physically and socially able to marry around age thirty and have children, women who are prone to “nervous troubles” and tuberculosis that should never have children, and the vast majority of women, who have one or two “weaknesses” but who consider motherhood as divine), thus reinforcing the idea that economic status, which drives the necessity for women to join the workforce, impedes reproductive health. (jvg)
What She May Expect: The Goal of Love is Marriage and the goal of Marriage is Maternity. Advertisement. The Hartford Courant. 27 Feb. 1901: 12. ProQuest Historical Newspapers: Hartford Courant (1764-1988). Web. March 2014.
Presented in headline fonts and embedded in the articles around it, this "advertorial" for the medications and medical advice of Dr R. V. Pierce of Buffalo New York takes on the guise of a news article. Through testimonies of satisfied customers and a direct appeal to women, it seeks to convince them that the use of such medications will cure them of “congestion of the uterus,” “disagreeable drains,” and other feminine ailments presumably preventing them from having children and making their husbands happy. It suggests the necessity of taking these medications in preparation for marriage, for “bodily strength and mental cheerfulness” as well as prior to birth, to “make the baby’s advent practically painless.” Subheads such as “For Baby’s Sake” make clear the implication that it is a woman’s duty to take care of herself so as to better take care of her family. [DS] 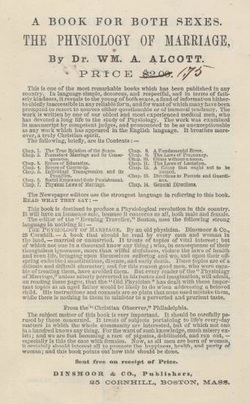 A Book for Both Sexes. Advertisement sheet for The Physiology of Marriage by Dr. Wm. A. Alcott. American Broadsides and Ephemera Series 1. Web. March 2014.
This single sheet advertises a marriage manual written by a medical doctor in 1860. The emphasis is on the doctor’s age and fatherly bearing, and book’s wholesome, “Christian” approach to these “topics of delicate and difficult character.” The proffered reviews reference the need for reliable information on sexual relations, while at the same time expressing strong beliefs that unhealthy (or immoral) sex are responsible for the decline of the human race. [DS]
Reagan, Leslie J. "From Hazard to Blessing to Tragedy: Representations of Miscarriage in Twentieth-Century America." Feminist Studies. 29.2 (2003): 357-78.         Ebsco. Web. 11 Mar. 2014.
This article takes a historical approach to deciphering the representation of miscarriage personally, medically, and politically, in the throughout the twentieth century. The author discusses, first, the institutionalization of the language of miscarriage (or pregnancy loss) that seems to permeate medicine and politics today, citing examples of medical jargon and literature that now refers to pregnancy loss as miscarriage instead of spontaneous abortions. An emphasis on the historical and cultural construction of the meaning of miscarriage is expanded upon with historical review of the views of pregnancy loss, and how miscarriage has helped shape feminism and the birth control, while simultaneously being affected by anti-abortion social movements.

The representation of women and miscarriage has changed drastically throughout the twentieth century. Once representing physical and mental hazard to women, miscarriage has also represented blessing and tragedy. In the early twentieth century, pregnancy in general and miscarriage specifically were not only physically draining, but potentially deadly. Citing large families, women’s health, and socio-economic factors, many women at the beginning of the century pleaded with feminists like Margaret Sanger for rights to contraception.