M. Jeanne Peterson attempts to dispel the enduring stereotype of “the angel in the house” in this essay, claiming that despite scholarly validation of the stereotype, its reality did not exist. Although this ideal affected women of all classes, the author says that it is something only the lower middle class strove to aspire to. Peterson uses the upper middle class Paget family to test the ideal against their actual lives and found that they did not conform to it, as the women of the upper classes had more freedom to be themselves. Although the author is writing about British Victorians, it still offers evidence that a deeper understanding of the women’s reform movement would be obtained with a closer examination of accounts of women’s lives and relationships in and out of the home. [RJ]

Professor of History at Harvard University, Helene E. Roberts asserts that despite the growing public concern over the unhealthy effects of tight lacing in the mid to late 19th century, women chose to remain in their corsets due to psychological conditioning and conventional submissive ideals. Roberts notes that tight lacing in many cases produced a kind of sado-masochistic quality to women’s understanding of the feminine ideal. This suggests that the average Victorian woman’s concern for propriety and adherence to the ideal far outweighed any natural concern they should have for their own health. This theory should be contemplated when studying progressive reform, as it suggests that women were trained to be self-oppressors when aspiring for the overwhelming and often contradictory feminine ideal. [RJ]

In this essay, Daniel Scott Smith claims that over the course of the 19th century, women gradually became more authoritative and gained more decision making power within the family. Smith’s evidence is that fertility rates plummeted, even though marriage was still common, due to women having more power over sex and reproduction. Having a 15-20 year period of reproduction prevents a woman from having much experience socially and economically, and it also inhibits any personal development.  Smith expounds that this change in the family structure is imperative to women’s history because it reveals that through it women were beginning to attempt to take control of their own lives. [RJ]

Download File
Woman in Courtship. New York Times 17 Oct. 1880: 6. ProQuest Historical Newspapers: The New York Times (1851-2009). Web. March 2014
The unnamed author of this essay uses the language of battle to describe the customs of the marriage proposal and the power play it involves. Specifically, the author takes issue with the prevailing assumption that because men always propose and women can only accept or refuse, that the man is the aggressor and the woman is helplessly placed on the defensive. On the contrary, the writer argues, women “are neither the simpletons nor the negative creatures which convention and literature make them out.” Instead, the writer credits women with “greater shrewdness, corrector intuitions, keener insight than men have in many things.” These gifts, the writer further posits, are the tools a woman uses to bring men to the altar—if she can keep enough control over “the inflammation of her own heart” to cooly entice her man down the path to matrimony. [DS] 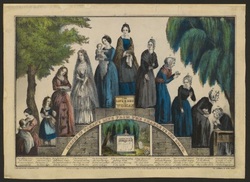 Currier & Ives. The Life & Age of Woman: Stages of Woman’s Life from the Cradle to the Grave. 1850. Lithography on paper.  Harvard University Library Open Collections Program Women Working, 1800-1930. Web. March 2014.
This 1850 lithograph offers a pictorial representation of the stages of woman’s life from birth to death, including girlhood, courtship, marriage, motherhood and old age. Brief rhymes printed below each of the 11 figures describe the progression from “a bud of sweet and gentle womanhood” to “a useless cumberer” who knits away her final days, a burden to society. While the captions reference husbands and sons, only the woman’s figure is represented. A printed headstone “Sacred to the memory of” placed in the center of the lithograph hints at the document’s use as a memorial to mark the passing of women of the time. [DS]

Lecture on Matrimony & Phrenology: Useful and Interesting Entertainment for Ladies and Gentlemen. Advertisement. Exeter, N.H.: C.E. Clark’s Press. 1849. American Broadsides and Ephemera, Series 1 no. 7368. Web. March 2014.
This printed poster advertises a Saturday-evening lecture held Sept. 15, 1849 by Dr. Noyes Wheeler. Promotion of the lecture, and the lecture itself, is notable for combining science, pseudoscience and religion with the institution of marriage. Leaving no discipline untouched, the lecture’s full title is “Love, Courtship, Selection and Spiritual Marriage, as Connected with Phrenology, Physiology and the Sacred Scriptures.” The event promises not only an instructive lecture “calculated to improve and elevate the mind,” but a public examination of heads afterward. [DS]